As I’ve continued to write this Syrah blog over the last year and a half, I’ve come to realize that there are basically two reasons why a winemaker makes Syrah these days. One is that they just happened to come across some high quality fruit that they can get for cheap and they decide to take a chance on it.  The other is that they have passion for Syrah (usually connected to some time spent in the Northern Rhone) and they believe that it can be made in California in a way that is true to its roots.  Usually, not always, the wine from the latter group is better than the former, and indeed, that is the case with Kieran Robinson Wines.

On first opening, Le Voyageur had aromas of coffee and red fruit and was definitely more of a cool climate style than the ’09.  Bright strawberry and coffee led to a core of acidity that I could smell in the glass.  The palate was bright but not unforgiving with a nice dry finish.  Very little oak present.

I let the wine sit on the counter for a day (as I usually like to do) and by the next day the wine really blossomed.  I got more fruit aromas to accompany the strawberry of dark cherry and plum, mixed with savory aromas of tobacco, leather and aged beef.  Those tobacco aromas carried over into a rounder, richer mid-palate, and the finish still had a good punch of acidity without any hint of alcohol. This wine just screams Syrah. It’s almost a perfect Syrah for me, with that balance of richness and acidity that creates such a beautiful tension.  It’s such a varietally correct Syrah and the second one I’ve tried from Bennett Valley that just tasted so French to me.  In both instances the wine was made by winemakers who had lived in the Northern Rhone.

Kieran’s stint in the Northern Rhone came after a harvest job in the Finger Lakes region in New York that stoked a budding fire for all things wine.  He moved to France with his wife Kristie and worked for Pierre Gauillard who, along with François Villard and Yves Cuilleron, is part of the famed Les Vins de Vienne portfolio which is responsible for rejuvenating parts of the Northern Rhone.  Kieran learned a lot during that time and brought back to the United States a love of Northern Rhone Syrah. 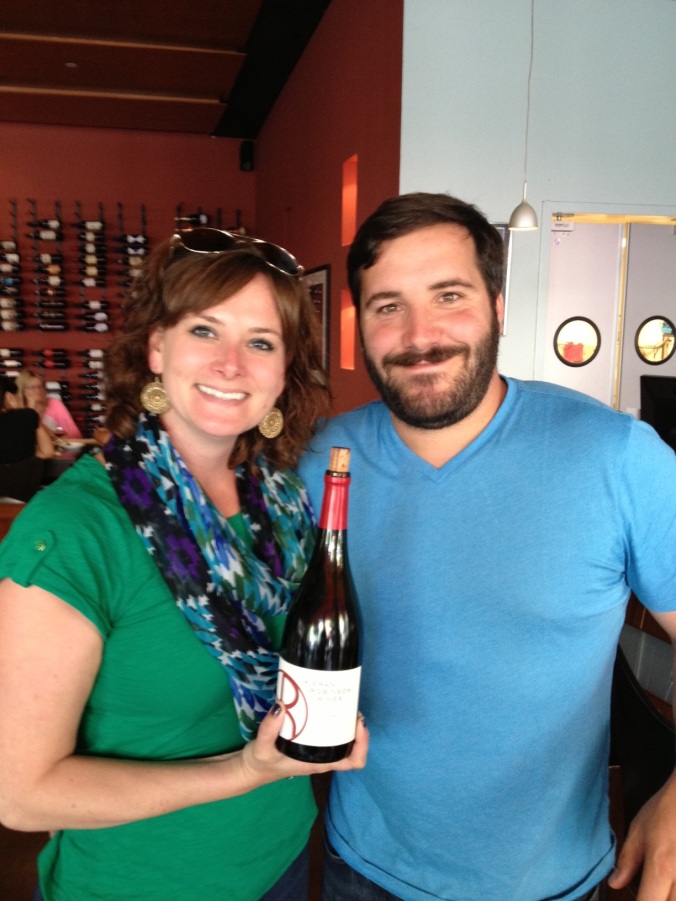 He ended up working for Paul Hobbs in Sonoma and then took a job at Adobe Road Winery in Petaluma as assistant winemaker.  He made his first two vintages of Kieran Robinson wines at the facilities at Adobe Road.  He then moved on to his current job at Jericho Canyon Vineyard in Calistoga where he is working as Assistant winemaker with Consultant Winemaker Aaron Pott and Michel Rolland.  He has continued making his own wine while holding down his full-time job at Jericho Canyon.  His wife Kristie is co-owner in the winery and shares Kieran’s deep love of Northern Rhone Syrah.

Kieran makes his Syrah in a hands-off style — he used native yeasts and tries to keep the oak treatment to a minimum.  There’s no added acid in this wine either.  After having trained under Paul Hobbs, Kieran isn’t exactly afraid to make additions to the wine if it makes it better, but in the case of this Syrah and this vineyard Kieran doesn’t feel any additions are necessary.  I couldn’t agree more.  This is Syrah from a vineyard that speaks in the language of the old world.  There’s no need to mess with it.

← Kieran Robinson: A Syrah, An Interview
The Tasty Chronicles →